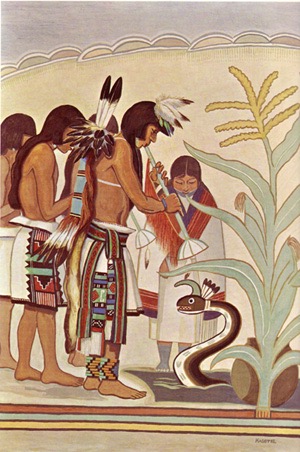 SNAKE CEREMONY and the FLUTE CEREMONY are performed by the Snake and Antelope societies in alternate years by two Hopi villages on Second Mesa These are the last of the major ceremonies of summer. The ceremony used to be performed on all 3 mesas. 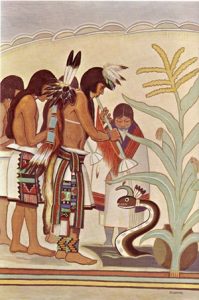 The Flute Ceremony occurred last weekend. It’s purpose is to help bring the last summer rains to ensure the maturation of the crops. And it is an enactment of mankind’s emergence to this the Fourth World. On the last day, a procession from the springs below with squash, melon and bean vines ascend to the mesa top. Cloud patterns are drawn with white cornmeal and bull roarers twirled to call the rain. 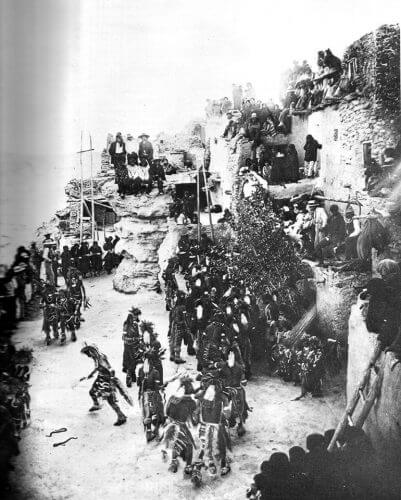 The snake is a symbol of mother earth and human sexuality from which all life is born. The antelope symbolizes fruitful reproduction and its horns the connection to the higher spiritual powers. Hence the union of the two is symbolic of the creation of life. Antelope and Snake races are held on separate days symbolizing the pathway of this union. Snake priests gather the snakes and keep them in the kiva. In the final phase, the snake priests dance with snakes in their mouth consummating this union. Following this, the snakes are returned back to the desert. This dance is NOT open to non-Indians.

This summer rain making ceremony has stirred fascination of Western world since the late 1800’s. Visitors, including Theodore Roosevelt, used to go up by horse and wagon for this.
One of my friends that lives in Shungopavi told me that when she was a youth in the 1950’s, she and other kids used to take their mule out to where the visitors would be camped and pose for a photo for cash donation.
The snake dance, which will be this weekend, has been closed at Hopi to outsiders since 1971 when American Indian Movement members (who were not Hopi) protested white people coming to Shungopavi Snake dance. The disturbance this caused led to the closure of the Snake Dance permanently to outsiders.

“Although audiences, predominantly white Anglo Saxons, loved the annual snake dance, some Native Americans, particularly the Hopi, were not amused…It was an affront to Hopi people to have others try it or mimic something very sacred to all of us,” said Donald Nelson, a Hopi that attended junior and high school in Prescott and now serves on the Native American Advisory Council at the Smoki Museum.”
“I put it in the perspective of if Hopi were to perform Christian rituals, dress in priests’ clothes and build a fake church, how would this society react,” Nelson said. He participated in the 1990 protest, which ultimately led to the Smoki disbanding after the 1991 performance.” (source: the Prescott Daily Courier)

In April, we again brought Mario Valeruz, a Sedona orchardist, up to 2nd Mesa to lead a day of putting in drip system, new trees and working on last years plantings. We also brought trees and grape vines for 3 more individual Hopi farmers, who were also there helping and learning.
While drip system supported farming is relatively new at Hopi–they have centuries of experience of growing food in their harsh, arid and often windy open lands. Loved hearing the stories of coyotes trying to steal their melons and how they nurture their crops with prayers and songs.

I will soon post to the website images of happy kids arriving at farm site, installing wire circles to keep out the hungry rabbits, and shoveling mulch. They all worked well together and very quickly rolled out several hundred feet of drip line and put it together along with planting and mulching.

We thank Dennis Connolly for coordinating with Hopi farmers and making several trips up hauling supplies. I also thank Bryan Phillips for hauling up the rabbit fencing. Big thanks to Jerry Walters, Carol Bickford and Lissa Buuske for shoveling mulch in Flagstaff and hauling it up to Hopi.

The December delivery of large amount of staple and fresh foods and gifts donated from our Hopi Holiday Project was to 2nd Mesa in December and January to 1st Mesa and Oraibi. We thank all of you who donated, helped collect, load and deliver that made this a very successful project that more than 90 families!

This year we plan to make a delivery focusing on kids learning aides, art and sports items and elder toiletry bags on December 18. We will coordinate this through our Hopi community helpers. We welcome volunteers to sort, bag and deliver. Hopi “Santas” will deliver to families at First and Second Mesa and Oraibi. 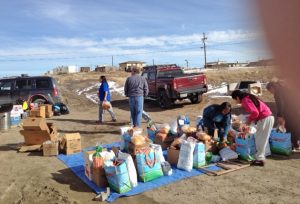 Sorting for family distribution at one our 2nd Mesa stops, photo by Dennis Connolly 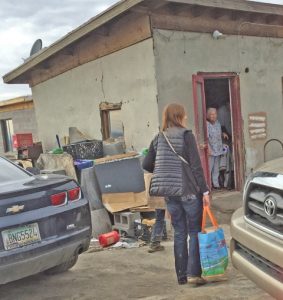 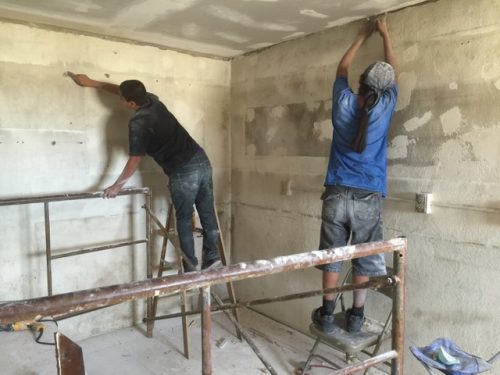 Home Remodel/Repair Project of historic one room home on top of 2nd Mesa to add a kitchen, shower and water tank/greywater drain system in village that has no sewer and water. We also put in a handicap ramp, provided needed storage and furniture. It has taken a lot of focused coordination, thrifty shopping and deliveries, and work by a contractor and family members, but we are near completion. This home is near the plaza and is part of the ceremonial life of the village. The renovation has made a huge difference for this family. They are very grateful for the support.

We thank Sedona Paint Center for the donation and deep discounts on the paints needed for the floor treatment and the walls.

We are coordinating with Red Feather Development Corporation, a non-profit service group, who is conducting a home weatherization project in Shungopavi to get more Hopis involved in providing the installations under an APS grant and to help spread the word in the village how people can sign up. 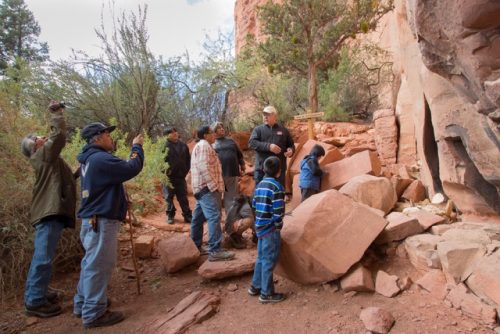 We put on 2 programs led by Ken Zoll, Director of VVAC: one at Sedona Library, and one at Montezuma Castle: Archaeological Site Protection and plans for the new VVAC. We brought Hopis down to participate in these programs. Plus helped organize a weekend of Ken Zoll, showing a group of Hopi youth and adults some of the sites in the Verde Valley. The Hopi group really enjoyed learning. We especially enjoyed how engaged the youth were in learning and exploring.

Second Mesa youth group Natwanhoyum just received permission to use an old building in their village as a space to learn and practice Hopi language and art. This space will also be used by elders.
Financial donations are needed to buy insulation, wiring, sheet rock and concrete rehabilitation materials for the floor, doors and windows, paint. Tables and chairs are needed too.
The group’s leaders also welcome skilled builder volunteers who can come up a day or a weekend and teach the boys how to do this interior construction work in this 14 ‘x 16’ space. 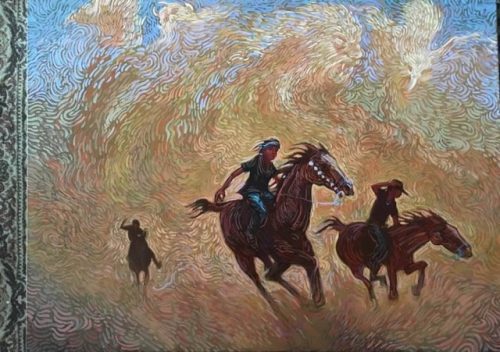 Away From The Ill spirit Wind is the name of this Shonto Begay painting. His perspective of dust devils:
“From the people that know their elements in stories and beliefs, the subtle motions of the natural world, I grew up believing certain dust devils embodies malevolent spirit. When one throws stick onto its paths, it creates a sound of dry hide. My grandmother warned us against ill effects of the spirit dust disturbances. It’s a profound respect of a different kind, of different hearts and ancient views.”

We Appreciate Your Support

We accept donations in support of our Hopi projects. Our office costs, labor and gas are donated by our dedicated volunteers. Our fiscal agent is Cornucopia Community Advocates, a 501c3 Arizona non profit corporation based in Sedona, AZ. Tax-deductible donations are made out to Cornucopia with Crossing Worlds Hopi Projects in memo field. Mailing address: Crossing Worlds Hopi Projects, PO Box 3288, Sedona, AZ, 86340 to make a one-time donation:

to make a recurring monthly donation (use pull down menu or enter another amount):

Stay in Touch with Us