Hopi artists, usually men, carve Kachina likenesses from cottonwood root (which is associated with water). In Hopi life they are given to girls at the Bean Dance and the Home Dance to teach them Hopi ways and of course today they have become an art form popular with collectors.

Children are given small figures carved of soft cottonwood roots, correctly painted and costumed to represent them; over the last few decades these “dolls” have become an art form of their own. These dolls are also called kachinas but are not invested with power though they are treated with great respect; their primary purpose is to help familiarize children with the real kachinas. (Frank Waters from Book of the Hopi) 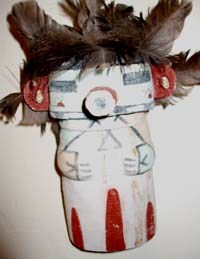 The old style dolls are not put on stands, are flat in the back, have real feathers, and are simpler in form and painted with natural pigments and usually hung on the wall. These are more symbolic and more traditional Hopi style which is seeing a renewed popularity today.

The contemporary sculpture form is the artist’s own creative interpretation of traditional forms and is an art form all of its own.There are male and female forms of many of the kachinas.

Link to images of Several of the Kachina carved figures from Smithsonian Online.

You may special order kachinas dolls.

The most traditional of all of the North American tribes, the Hopis carry on a ceremonial life that evolved from thousands of years of relationship to the striking lands of the Southwest and Mexico. They are farmers who miraculously grow corn, beans and squash in the sand in a land that averages only 10″ of moisture.

A reverent people, their life revolves around the ceremonial cycle of the year. Hopi is known as a place of power where humans could call forth the assistance of nature to support their existence in this arid land. The power of their faith is immense.

To derive water in this desert land, they developed a complex religion to secure supernatural assistance in fulfilling their needs. One element of this religion are the Kachinas. Kachinas are the spirit essence of everything in the real world. The Kachinas represent game, domestic plants and animals, birds, insects, even death itself. The creative force of the sun and the abstract power inherent in neighboring tribes are visualized as kachinas.

Kachinas are supernaturals, embodying the spirits of living things and also the spirits of ancestors who have died and become a part of nature. Kachinas are believed to possess powers over nature, especially the weather, but higher gods limit the extent of their powers.

“Excavation of large ancestral Hopi Pueblos in the Little Colorado River valley indicate that the religion had a major influence on Pueblo culture after A.D.1300. Katsinam appear on pottery by 1325 on the Mogollon Rim and before 1350 along the upper and middle Little Colorado River. On the Hopi Mesas, katsinam motifs postdate 1350 on ceramics and possibly on rock art. Katsinam appear on rock art as the Rio Grande style in the Rio Grande Valley, Zuni, and middle Colorado River areas by 1350. By 1500, the religion was present in all western Pueblos of Hopi, Zuni, and probably Acoma, and in the eastern Pueblos south and east of Santa Fe. It also might have been present in the Tewa villages.”(Peabody Museum of Archaeology and Ethnology on line exhibit)

The representations of beings that are the easiest to identify as katsinam come from murals in kivas which may date as early as 1350 at Hopi and the ancestral site of Homol’ovi south of today’s Hopi. Details of the paintings on Awatovi murals, another ancestral Hopi site, show costumed and masked figures as separated elements or interacting in scenes. Ritual drama and symbolic elements in the murals are recognizable and still used today among Pueblo people.

When Kachinas appear during ceremonies, they assume visual form and appear in the streets and plazas of the villages. As a supernatural they may cure disease, grow corn, bring clouds and rain, watch over ceremonies and reinforce discipine and order in the Hopi world.

The Hopi do not worship these kachinas but rather treat them as friends or partners who are interested in Hopi welfare. They give substance to the immaterial, becoming in the process intermediaries between the physical and the spirit world.

The Kachina season in the villages begins around the time of Winter Solstice as they prepare the ground for the planting season and closes in late July with the bringing in of the first harvest.

There have been over 800 different kachina beings documented. In any one season, 200 different ones may appear.

Simple as is the meaning of the kachina,everything about it is stylistic and complex, and it has exerted a powerful influence throughout all the pueblos in the Southwest. There are no kachinas in the Rio Grande pueblos, but in many of their unmasked dances one often detects the distinct kachina stylizations. Zuni is the only other pueblo which has kachinas; these, say the Hopis, were given them by the Hopis who preceded them during the Emergence. The origin of Hopi kachinas lies far back in the prehistoric past. The Kokopilau Kachina sings a song in a language so ancient that not a word of it is understood by the modern Hopis, who know only that kachinas accompanied them throughout their migrations. Indeed, they assert that kachinas came up with them during their Emergence from the womb of Mother Earth. Tipkyavi, meaning “womb,” is the name given a place at the base of the San Francisco peaks, the last site where the Hopis lived before settling in their present villages and still the last stopping place of the kachinas on their way home from Niman Kachina; it is also represented on Third Mesa by a kisonvi (plaza in front of a kiva) in Oraibi.

All these academic considerations, however, are invalidated by the basic truths and meaning of the kachina. It is distinctively Hopi. In its conception the Hopis have created a form for the everlasting formlessness; a living symbol unique in the world for that universal and multifold spirit which embodies all living matter; which speaks to us, as only the spirit can speak, through the intuitive perception of our own faith in the one enduring mystery of life. (Frank Waters from Book of the Hopi)

kachinas
©2022 | Designed and Developed by The Myss Miranda Agency, LLC